﻿After its five year tour through 14 states, I unpacked
my 2-panel, painted collage i am water last night. Is
it possible to be envious of a well-traveled artwork?
I did accompany this work to New York during my
2007 solo exhibit at the SOHO20 Gallery in
Chelsea, but since then it has been touring with the
group exhibit The Veil:Visible & Invisible
Spaces to college campuses all over the United
States.

In 2010, I got to view the veil exhibit when it was
at California State Dominguez Hills near L.A.,
just before it was taken down. During that 2010
trip, I repaired the fragile sewing pattern paper
edges of the work, so it could endure three more
years of travel. It held up well since then, much to
my relief and that of the curator, Jennifer Heath. 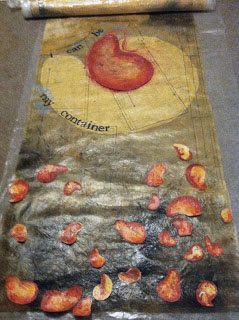 i am water has the words of my poet
friend, LouAnn Shepard Muhm, block
printed upon it. The two panels read
like this:

Thank you so much, Tiffany. This feels like a real vote of confidence. And "I Am Water" is one of the loveliest works of art I have ever seen. Thanks so much for participating in The Veil.
Jennifer