To make art is to be vulnerable.

There are times when subtly and silence is golden, and
others when it is tense. Times to speak up. Times to stay
silent. I am still learning how to accept and embrace all of
the above, while not second-guessing myself so much. It
will always amaze me how making art is such a great
metaphor for simply living life.


.
I have never claimed to be a great speaker. I enjoy some

writing, and my art always communicates in a way my words
can not. I suppose if I got more satisfaction from expressing
myself verbally, art wouldn't be as essential. Here lies the
tension in both talking about art and teaching it... I have to dig
deep when explaining the necessity of making art and putting
yourself out there. I know the necessity of making art in my bones,
but explaining that verbally is especially challenging. I suppose
this is why it is so important for my students and my own children
to see my work as it develops through all of its awkward stages.
If I expect anyone else to take that leap and be a little vulnerable,
then I too have to show some courage.

Art is not about self-indulgence, like some who dare not make
it would like to think. For me, selling the product of someone else
is so much easier than putting my own work out there. But, as
most of us know, not doing art when you are an artist isn't
a good option either. To make art is to be vulnerable. But then
to truly live, is to be vulnerable--end of story.

This time of year I crave to be bathed in the color and
patterns of Marimekko. For more than 60 years, this design
from Finland has helped us escape tundra-states-of-mind.
.
I speak and read very little Finnish, but somehow the
vintage Marimekko fabric designs (and some of today)
speak to me. Sometimes in whispers, most often in jubilant
yelps, Marimekko designs tell me something about
where my ancestors came from, and always make me
smile.

What I have learned from Marimekko: 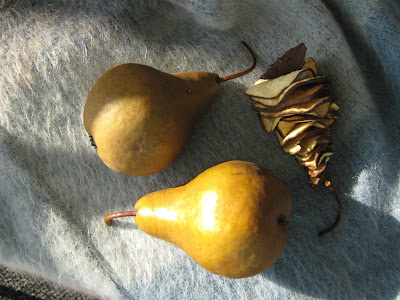 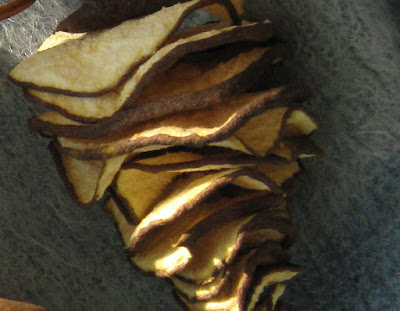 This week I shared some images of my work from over
the last nine years with my students. Also, I dehydrated
this pear andreassembled it to share with them. I was
trying to give them insightinto the creative process, how
ideas are born. Of course, there isn't a formula--but I
will say that for me it is extremely layered. Layers of
memories and experiences. Layers of images and
forms. Layers of ideas, failed attempts, and patience.
(I've learned to save failed attempts, because they
often point to the next step or are useful years later.)

Eight years ago I create a layered pear just like the one
above by dehydrating cross-sections of a pear and then
reassembling it. At the time, I was suffering from
dehydration during pregnancy. Carrying that dehydrated,
layered pear around the house over a few months, I
wondered how it could influence my next step of art-
making. In April 2004, our bundle was born and my
energy was restored. That layered pear led to four years
of creating pear-formed sculptures out of sewing pattern
paper, wire, and beeswax--and a solo show at the
SOHO20 Gallery in NYC. Ideas usually start small,
but they often grow in layers and sometimes get bigger
than I ever thought possible. (And yes, that also pertains
to children, now bigger than I ever thought possible!)

An idea of scale 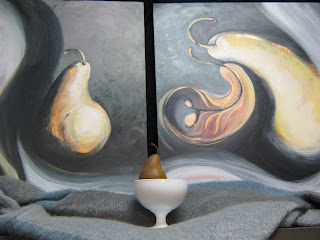 This shows the size of the painted pears next to an actual pear.
This photo also shows the metallic copper paint that I used in
these paintings.
No comments: